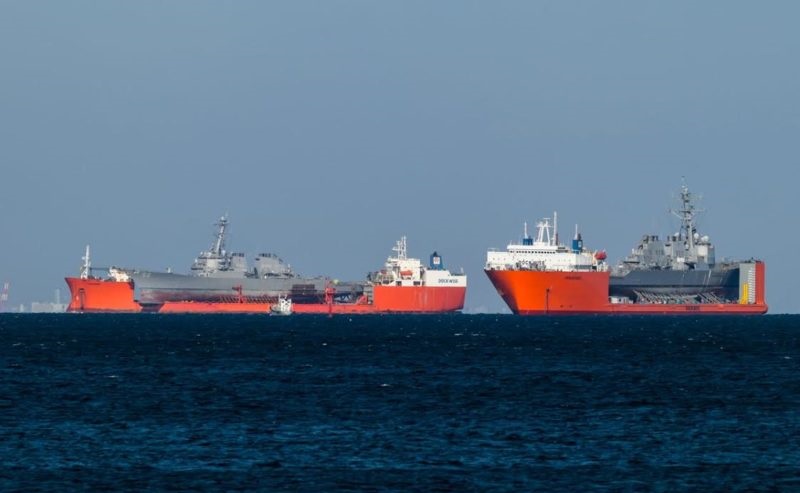 Multiple US Navy officers heading the USS McCain and USS Fitzgerald, which were involved in crashes last year that led to the deaths of 17 sailors, will face court martial proceedings on charges including negligent homicide and dereliction of duty, according to a Tuesday statement.

Earlier in the day, Defense News reported that the navy’s top surface warfare officer was expected to resign in light of an upcoming recommendation that he be relieved of duties. “Today, I have informed the chief of naval operations that this Thursday I will step aside earlier than previously planned as the commander, Naval Surface Forces and commander, Naval Surface Force, US Pacific Fleet,” Adm. Tom Rowden said in a statement to Military.com.

Seven sailors died when the USS Fitzgerald collided with the ACX Crystal cargo ship on June 17 of last year, and 10 were killed in August when the USS McCain collided with the Alnic MC merchant vessel. “Both of these accidents were preventable and the respective investigations found multiple failures by watch standers that contributed to the incidents,” said Adm. John Richardson, chief of naval operations, on November 1.

The Fitzgerald crash “resulted from an accumulation of smaller errors over time, ultimately resulting in a lack of adherence to sound navigational practices,” according to a review conducted by the Navy. In the McCain-Alnic incident, “McCain’s commanding officer disregarded recommendations from his executive officer, navigator and senior watch officer to set the sea and anchor watch teams in a timely fashion to ensure the safe and effective operation of the ship,” the Navy review found.

The commanding officer of the USS McCain faces possible charges of negligent homicide, hazarding a vessel and dereliction of duty, the Navy said Tuesday. Four officers, including the commanding officer, aboard the USS Fitzgerald could all face the same three charges, the statement said.

“The announcement of an Article 32 hearing and referral to a court martial is not intended to and does not reflect a determination of guilt or innocence related to any offenses,” Capt. Greg Hicks, Acting Chief of Information for the US Navy, said in a statement.

“Additional administrative actions are being conducted for members of both crews including non-judicial punishment for four Fitzgerald and four John S. McCain crewmembers,” Hicks added.

At least six officers from the US’ 7th Fleet were relieved of duty following the accidents. US Navy ships were involved in four crashes in the same region throughout 2017 as a whole, but only two of the collisions resulted in fatalities.