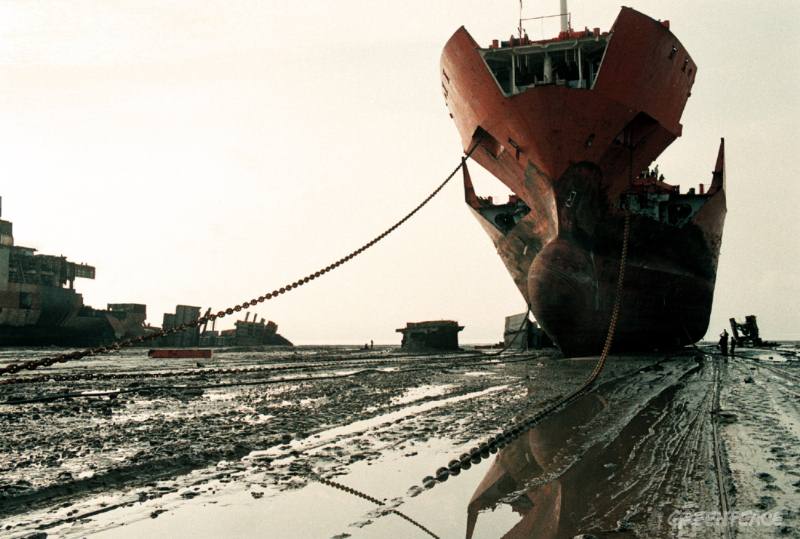 Brussels, 20 February 2018 – According to new data released today by the NGO Shipbreaking Platform, 835 large ocean-going commercial vessels were sold to the scrap yards in 2017. 543 were broken down – by hand – on the tidal beaches of Bangladesh, India and Pakistan: amounting to 80,3% of all tonnage dismantled globally.

“The figures of 2017 are a sad testimony of the shipping industry’s unwillingness to act responsibly. The reality is that yards with infrastructure fit for the heavy and hazardous industry that ship recycling is, and that can ensure safe working conditions and containment of pollutants, are not being used by ship owners”, says Ingvild Jenssen, Founder and Director of the NGO Shipbreaking Platform. “It is particularly shameful that so many European shipping companies scrap their vessels on beaches. Their obvious lack of interest to ensure that shipbreaking workers around the world enjoy best available technologies, and that the environment is equally protected everywhere, clearly calls for additional pressure from authorities, shipping clients and financers”, she adds.

The negative consequences of shipbreaking are real and felt by many. On the one hand, workers – often exploited migrants and some of them children – lose their life, suffer from injuries caused by fires, falling steel plates and the general unsafe working conditions, as well as from occupational diseases due to exposure to toxic fumes and materials. On the other hand, coastal ecosystems, and the local communities depending on them, are devastated by toxic spills and various pollutants leaking into the environment as a result of breaking vessels on beaches.

Despite the terrible accident that shook the international shipbreaking community in 2016, no lesson has been learned in Pakistan. In 2017, at least 10 workers lost their lives at the shipbreaking yards on the beach of Gadani. The Platform documented 15 deaths in the Bangladeshi yards last year, where also at least another 22 workers were seriously injured. Whilst international and local NGOs were repeatedly denied access to the Indian shipbreaking yards, the Platform was informed of at least eight fatal accidents in Alang in 2017.
With the oil and gas sector seeing a downturn in the last couple of years, the Platform has documented an increase in offshore units that have gone for scrap. Out of the 91 units which have been identified as demolished in the last three years combined, 41 of them ended up on the beaches of South Asia after being towed for thousands of kilometers across the globe. Three floating platforms cold-stacked in Scotland that were sold by Diamond Offshore for scrap in 2017, allegedly to cash buyer GMS, were stopped from leaving following an alert by the Platform on their highly likely illegal export. “Fixed platforms cannot easily escape decommissioning rules, whereas we have seen that nearly half of all floating units slip under the radar and end up on beaches – this double standard has to stop”, states Francesca Carlsson, Corporate Liaison and Policy Officer of the NGO Shipbreaking Platform.

All vessels sold to the beaching yards pass through the hands of scrap dealers known as cash buyers. In this way, ship owners attempt to shield themselves from responsibility, and are paid upfront the highest market price in cash for their end-of-life vessels by the dealers. To reduce costs and to exploit the loopholes in international legislation, cash buyers will change a vessel’s flag to one of the typical last-voyage flags of convenience, such as Comoros, Palau and St Kitts and Nevis. Cash buyers will also register the vessel under a new name and a new post box company, rendering it very difficult for authorities to trace and hold cash buyers and ship owners accountable for illicit business practices.

“Ship-owning companies that stand by their corporate social responsibility directly sign contracts with ship recycling facilities they have inspected and found adequate. Choosing to sell a ship to a facility which is on the EU list of approved yards is the easiest way for a ship owner to be assured that there has been a quality check. Fortunately, it is becoming increasingly difficult for ship owners to simply blame the cash buyer: investors and authorities are expecting ship owners to control the choice of the recycling yard, and expect that choice to be a yard that does not endanger workers and the environment [2]”, says Carlsson.